Describing the motion of an object can be difficult to do and using graphs help make motion easier to understand. Motion is a ch

ange in position measured by distance and time. Speed tells us the rate at which an object moves. Speed graphs are distance-time graphs; sometimes people label them as position-time graphs as well. Time is plotted on the X-axis and distance or position on the Y-axis of a line graph.
A distance-time graph tells us how far an object has moved with time.
• The steeper the graph, the faster the motion.
• A horizontal line means the object is not changing its position. It is not moving, and it is at rest.
• A downward sloping line means the object is returning to the start.

Use the text and the graphs above to choose all of the correct answers concerning speed? 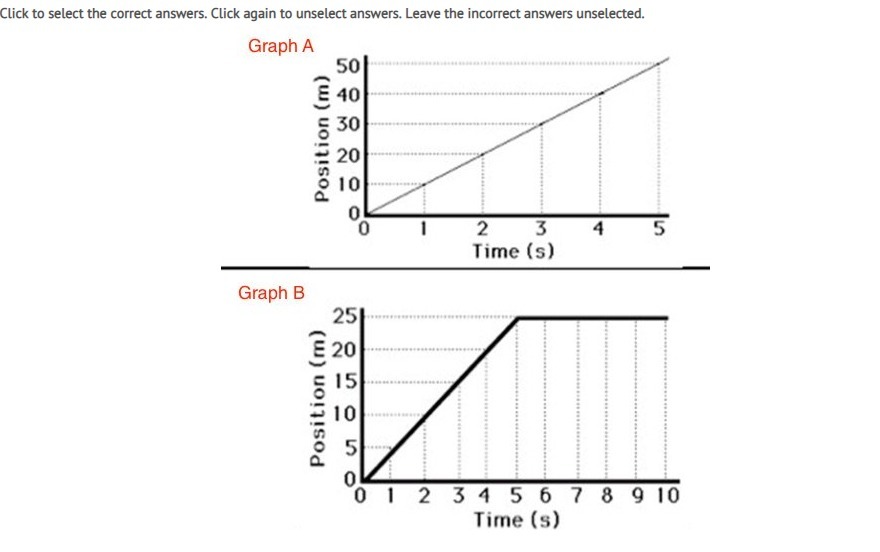 In both graphs, speed will be measured in meters/second.

In graph A, the object travelled a distance of 40 meters in 4 seconds

In graph B, the object is at rest for 5 seconds.

These are the correct answers

2. Looking at the graph, you could identify the distance of 40 meters on the Y-axis and trace it down to time at 4 seconds on the X-axis.

4. In graph B, the object is at rest at 5 seconds. From 5 seconds, it maintained a horizontal line indicating that it was static.

Because, velocity of sound increases about 0.6 m/s for every 1 degree celsius rise in temp.

Susan's 12.0 kg baby brother Paul sits on a mat. Susan pulls the mat across the floor using a rope that is angled 30∘ above the
Pavlova-9 [17]

since there is no movement in Y direction therefore

A person running at 5 mph puts on a burst of speed to finish a race at 7 mph. What is the velocity
Fantom [35]
Initial velocity = 5mph
final velocity = 7mph
6 0
1 year ago
Other questions:
Add answer
Login
Signup
Login Signup
Ask question!