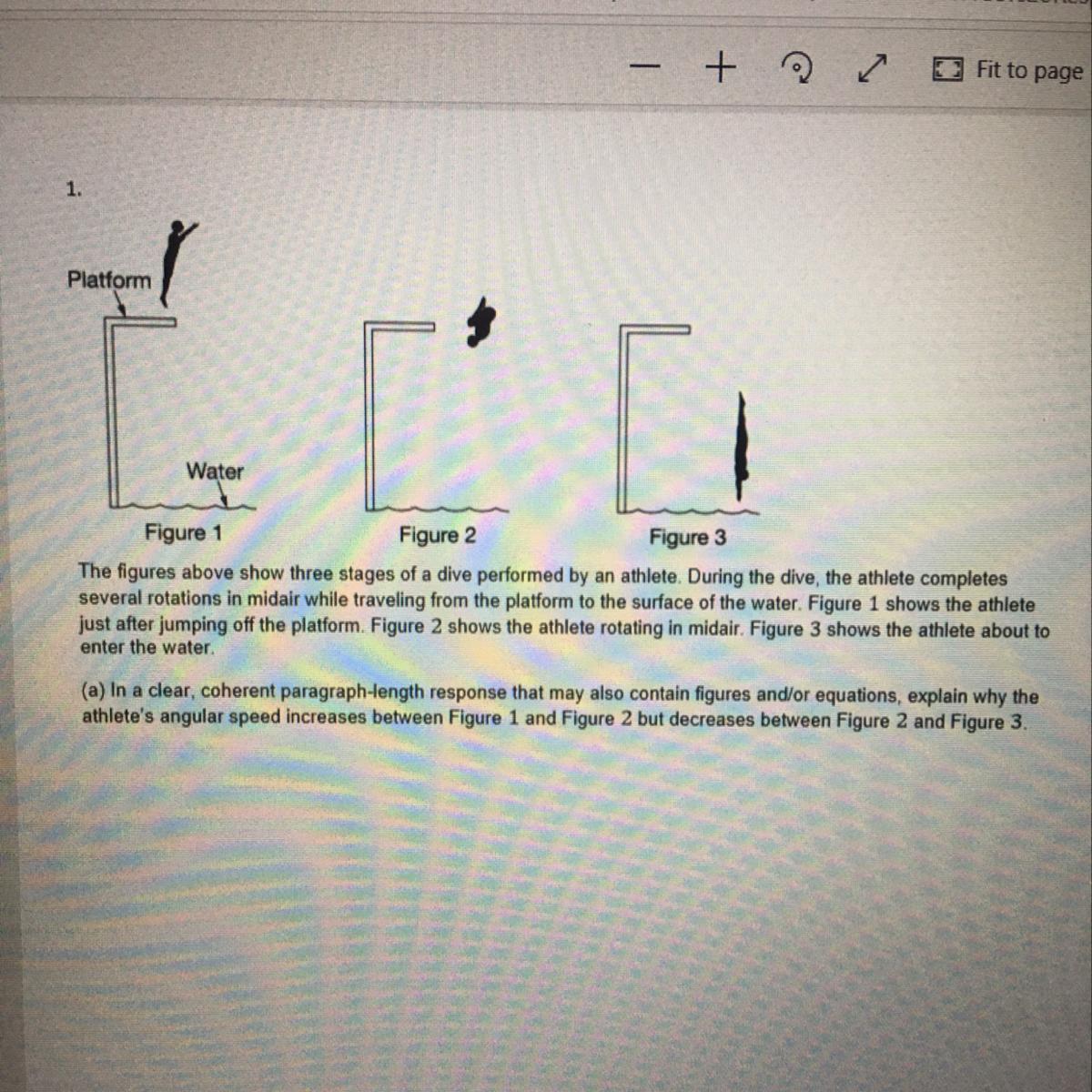 The angular speed of an object in rotation is the rate of change of its angular displacement:

is the angular displacement

is the time elapsed

The angular momentum of an object in rotation is given by

where I is the moment of inertia of the body.

The moment of inertia of the athlete decreases as we move from figure 1 to figure 2: this is because the athlete pulls his arms and legs towards the body. Since the athlete is an isolated system, the angular momentum

must remain constant; and therefore, since

On the other hand, when we move from figure 2 to figure 3 the moment of inertia of the athlete increases again, and therefore, since

must remain constant, the angular speed will decrease.

I is the moment of inertia

is the angular speed

we can rewrite the rotational kinetic energy as:

In part a), we said that the angular momentum L remains constant, however the angular speed

So the answer is

thxs for the points

Which of the following statements is/are true? Check all that apply.
Digiron [165]

The statements which are true are:

1) A person's power output limits the amount of work that he or she can do in a given time span.

4) Power can be considered the rate at which work is done.

Power can be defined as the the rate at which the work is done. Mathematically,

' is the amount of work done in time '

Also one can perform some work in the expense of the energy that he/she consumes. So alternatively power can also be defined as the rate at which the energy is expended.

The SI unit of work done is Joule. So the unit of power in SI system is

In order to satisfy as many wants as possible, it is necessary to achieve PRODUCTIVE efficiency
dmitriy555 [2]

In order to satisfy as many wants as possible, it is necessary to achieve productive efficiency

because otherwise resources are idle.

because otherwise output may go to where it is less valued.

answer : because otherwise resources are idle.

A truck driver is broadcasting at a frequency of 21.594 MHz with a CB (citizen’s band) radio. Determine the wavelength of the el
UNO [17]

Our truck driver won't find anyone to talk to, and he could be in real trouble.

-- If our driver driver bought a CB radio that transmits on this frequency, the radio was built and sold illegally.  It's not 'type-accepted' by the FCC for CB service, and people with CB 'license' certificates are not allowed to operate it.

-- If he built it himself, he's also in trouble.  People with CB 'license' certificates are not allowed to operate equipment that they build for themselves, (like 'ham' radio operators are).

-- Whether he built it or bought it, he's not allowed to transmit on 21.594 MHz with a CB 'license' certificate.

-- The CB <u><em>antenna</em></u> he buys at the super truck-stop on the interstate is designed for the legal CB channels, and it won't work very well at this frequency.  His transmit output power will come out low, and his receiver won't be very sensitive.

-- And finally, the only other people equipped to talk to him on that frequency are other people who also have illegal equipment like he has, and are also operating it illegally like he is.  Fortunately there still aren't too many of those.  As soon as he turns his radio on, he'll be amazed at how quiet the band is, and he very likely won't ever find anybody else to talk to.

Have a big ten-fawer there, Good Buddy !  Keep the bugs owf yer bumper, and say hi to Smokey for me.

counterclocwise to the x direction

Sum of forces in vertical are equal, let movement to right and upwards be positive while left and downwards be negative

counterclocwise to the x direction